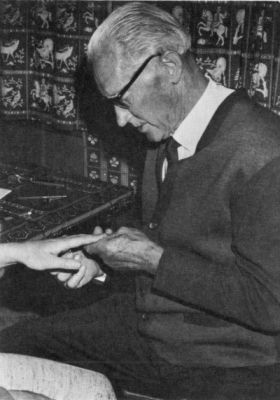 Rudolf Breuss [1899-1990] was an Austrian naturopath whose 42-day cancer juicing regime achieved international fame.  The recipe is simple enough: 55% red beet root, 20% carrots, 20% celery root, 3% raw potato, 2% radishes. His theory was that cancer survives on protein and that when deprived of protein, the tumor dies. Unlike some juice fasts, the Breuss method requires both juicing and straining.  However, other liquids, such as herbal teas are not simply permitted, but required, especially the white sage tea.

My personal opinion is that this is one of many possible juice fasts, but it has been extremely popular, especially in Europe, and thousands of people claim to have been cured by it.  Nutritional experts tend to emphasize the vitamins, minerals, and live enzymes found in fresh juice made from organically grown plants.  My hunch is that antioxidants play a more important role, and that is perfectly safe to add a few herbs and/or herbal extracts to the vegetable juices, but Breuss himself insisted on absolute adherence to his instructions . . . and they are fairly lengthy and sometimes complicated.  In short, one must read his book in order to be fully compliant.