“Not only does it appear to be effective, but it’s very selective,” Lai said. “It’s highly toxic to the cancer cells but has a marginal impact on normal breast cells.”

Wormwood is the Basis for a
Cancer-fighting Pill 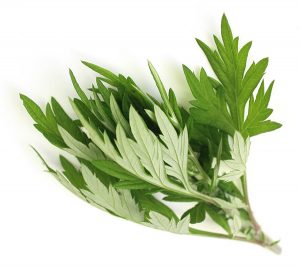 A pill that could be taken on an outpatient basis to combat breast cancer or leukemia sounds like a fantasy, but the treatment is becoming a reality due to the investigation of a University of Washington research team into an ancient Chinese remedy for malaria.

Two bioengineering research professors at the University of Washington have rediscovered wormwood as a promising potential treatment for cancer among the ancient arts of Chinese folk medicine.

“Not only does it appear to be effective, but it’s very selective,” Lai said. “It’s highly toxic to the cancer cells but has a marginal impact on normal breast cells.”

Research professor Henry Lai and assistant research professor Narendra Singh have exploited the chemical properties of a wormwood derivative to target breast cancer cells with surprisingly effective results. A study in the latest issue of the journal Life Sciences describes how the derivative killed virtually all human breast cancer cells exposed to it within 16 hours.

3 Environmental risk factors for cancer are many. Lifetime exposure to the female hormone estrogen and estrogen-mimicking chemicals such as some pesticides and herbicides has been linked to an increase in breast cancer risk. In 1991, the International Agency for Research on Cancer classified the pesticide DDT as a possible human carcinogen, and the U.S. Environmental Protection Agency (EPA) has classified DDT as a probable human carcinogen.

The manufacture of PCBs, the oily liquids or solids used as coolants and insulators, was stopped in the United States in 1977 because of concerns that exposure increases the risk of cancers, but PCBs are still found in the environment.

The use of the bitter herb wormwood is nothing new. Used for centuries to rid the body of worms, it is also an ingredient in the alcoholic beverage absinthe, now banned in most countries.

Artemisinin, the compound that Lai and Singh have found to fight cancers, isn’t new either. It was extracted from the plant Artemisia annua L., commonly known as wormwood, thousands of years ago by the Chinese, who used it to combat the mosquito-borne disease malaria. The treatment with artemisinin was lost over time but rediscovered during an archaeological dig in the 1970s that unearthed recipes for ancient medical remedies.

About seven years ago, Lai began to hypothesize that the process might work with cancer, too.

“Cancer cells need a lot of iron to replicate DNA when they divide,” Lai explained. “As a result, cancer cells have much higher iron concentrations than normal cells. When we began to understand how artemisinin worked, I started wondering if we could use that knowledge to target cancer cells.”

Lai devised a potential method and began to look for funding, obtaining a grant from the Breast Cancer Fund in San Francisco. Meanwhile, the UW patented his idea.

The thrust of the idea, according to Lai and Singh, was to pump up the cancer cells with maximum iron concentrations, then introduce artemisinin to selectively kill .

In the current study, after eight hours, just 25 percent of the cancer cells remained. By the time 16 hours had passed, nearly all the cells were dead.

An earlier study involving leukemia cells yielded even more impressive results. The cancer cells were eliminated within eight hours. A possible explanation might be the level of iron in the leukemia cells. “They have one of the highest iron concentrations among cancer cells,” Lai explained. “Leukemia cells can have more than 1,000 times the concentration of iron that normal cells have.”

The next step, according to Lai, is animal testing. Limited tests have been done in that area. In an earlier study, a dog with bone cancer so severe it couldn’t walk made a complete recovery in five days after receiving the treatment. But more rigorous testing is needed.

“If the process lives up to its early promise, it could revolutionize the way some cancers are approached, Lai said. The goal would be a treatment that could be taken orally on an outpatient basis.
“That would be very easy, and this could make that possible,” Lai said. “The cost is another plus: At $2 a dose, it’s very cheap. And with the millions of people who have already taken artemisinin for malaria, we have a track record showing that it’s safe.”

Whatever happens, Lai said, a portion of the credit will have to go to unknown medical practitioners, long gone now. “The fascinating thing is that this was something the Chinese used thousands of years ago,” he said. “We simply found a different application.”

Artemisia annua – Cultivation methods of a plant with a great future