Indigenous communities and environmentalists call it biopiracy; international pharmaceutical companies and academic researchers call it bioprospecting. Whatever one chooses to call it, the Free Trade Agreement between the United States and Central America and the Dominican Republic (CAFTA) has opened the door to foreign ownership of the right to exploit the region’s abundant and diverse tropical flora.

Under the intellectual-property provisions of CAFTA, the US has forced legislation in member countries that potentially legalizes patenting the biological resources of the region to the benefit of pharmaceutical and agroindustrial companies.

These institutions can now seek plants with properties previously unknown to them, and then legally claim ownership of the processes to which they are put. These rights completely ignore the prior use and even dependence of these plants by local and indigenous communities, which may have been using them for centuries and consider them part of their heritage.

These researchers and companies arrogate the biodiversity of underdeveloped countries to themselves, as well as the knowledge of its use, a trend that has come to be called biopiracy. It goes on under a virtual blackout by the media and is publicized almost exclusively only by some scientists and environmental organizations.

This arrangement puts those vulnerable to dispossession of their ancestral knowledge at a distinct disadvantage when it comes to protecting their rights. The director of the Technical Biodiversity Office of the National Council of Protected Areas in Guatemala, Fernando García Barrios, explained, “The governments of Central America do not create the administrative and legal mechanisms for their genetic resources and associated traditional knowledge.”

What is needed, he says, is a “common, coordinated regional regimen that supports regional and national initiatives” on questions of intellectual property and access to these resources and knowledge bases.

In Guatemala, there is no clear codification of environmental crime, such as patenting these resources without consulting the affected local communities.

Panama passed a Law of Protection of the Spiritual and Traditional Medicine Knowledge in 2002, but even there, said Kuna biologist Heraclio Herrera, the law has significant loopholes and does not provide rules against biopiracy. Panama’s General Environmental Law requires previous consent of indigenous communities for bioprospecting, but Hererra said, “the investigators have avoided the consultative process by going directly to a person in the community possessing knowledge of traditional medicine and buying information.”

The idea behind this market-driven approach to conservation is that, if only these people were aware of the economic value of the environment and were given jobs exploiting that value, they would take better care of a goose that lays golden eggs.

Nicaragua has the Law of Environmental Crime that defines of resources as a crime, which went into effect in June.

Julio Sánchez, of the Humboldt Center’s Biodiversity Program, said that this and other laws regulating access to these resources could challenge the intellectual-property clauses of CAFTA, “preventing the potential effects of CAFTA.”

But this remains uncertain at best. Under the terms of the pact, the US can decertify any CAFTA member that attempts to legislate away the odious aspects of the agreement. This is a one-way street as CAFTA can pre-empt any Central American national legislation. 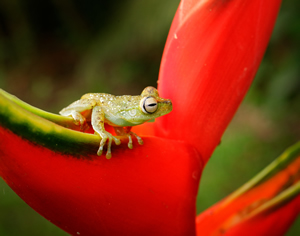 Costa Rica has not yet ratified CAFTA. Newly inaugurated President Óscar Arias is committed to ratification, but National University of Costa Rica professor Silvia Rodríuez warned, “Upon ratifying the treaty, the communities of Costa Rica will perhaps soon find out that the statutes of the law of biodiversity are condemned to become ‘a restriction of market access.'”

Costa Rica has already given away much of its botanical patrimony. In 1991, the pharmaceutical company Merck contracted with the National Biodiversity Institute. For US$1.1 million the company bought the rights to some 500,000 species and microorganisms in the country’s national parks. The contract, which has been renewed three times, gives Merck patent rights to any medicine or product developed from any substance discovered.

The Meaning Behind the Conflict

This situation clearly highlights issues of sovereignty and, for the indigenous communities, stacks the cards against indigenous ideas that diverge from property relations as understood by the dominant cultures.

But recognize that there is more at stake and that there is a clear correlation between biodiversity and ethnic and cultural diversity.

Italian anthropologist Luisa studied the extinction of indigenous languages and said that ethnic diversity is threatened by the same global forces that attack biodiversity.

Sporadic attempts to defend against this encroachment had some limited success in the region before CAFTA. In 2003, a group of professors and students of the agronomy department at the University of San Carlos in Guatemala rejected a relationship with the University of Chicago somewhat like the Panama arrangement because it lacked provisions for indigenous consultation on plans to go bioprospecting in their localities.

“The project was rejected because the university wanted the right of intellectual property and we would have had to pay for the information,” said University of San Carlos agronomist Walter García. But now, said García, some 15 professors are linked to transnationals, including Monsanto, Syngenta, and Cristiani Burkard, seeking to start bioprospecting projects in Guatemala.

Local Communities in Guatemala have been Burned by These Deals Already

A plant known in Quiche as cardo been patented for cancer treatment. Elsewhere in the country, natural medicines have been appropriated for tuberculosis and for malaria. 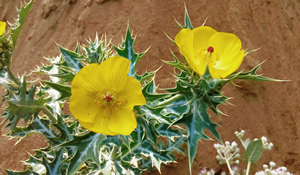 In the Merck deal in Costa Rica, the regions where the company has patent rights to everything alive is also home to eight indigenous cultures whose people were never consulted, nor were they party to the negotiations, nor considered as beneficiaries.

But several indigenous families were displaced from project areas.