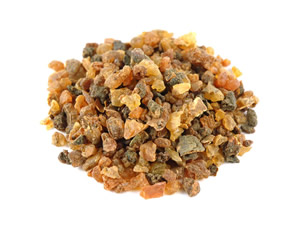 Myrrh trees can be found throughout northern tropical Africa and the Arabian Peninsula.  The tree reaches about 15 feet in height, is spiny, and drought tolerant.  The gum is harvested by making cuts in the bark. 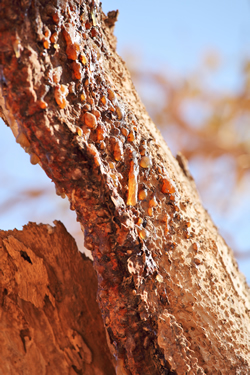 JERUSALEM (December 9) – Myrrh, one of the most important perfumes in ancient times that is mentioned 11 times in the Bible (including six times in the Song of Songs) has been shown to have the potential of a powerful anti-cancer agent.

Researchers at New Jersey’s Rutgers University identified the active ingredient in myrrh and shown that it kills cancer cells in laboratory conditions, but it has not yet been tested on animals or clinically on humans.

Dr. Mohamed Rafi, one of the co-researchers in the study and an assistant professor in the university’s department of food science, said the active ingredient in myrrh shows particular promise for the prevention and treatment of breast and prostate cancer.

The findings appear in the current (November 26) print edition of the Journal of Natural Products, a peer-reviewed journal of the American Chemical Society, the world’s largest scientific society.

The bitter-tasting, fragrant resin (known as mor in Hebrew) has been used for thousands of years as an ointment, perfume, incense, and embalming fluid. It is the first perfume mentioned in the Bible (Exodus 30:23-25) among ingredients from which the holy anointing oil used in the Tabernacle was prepared.

The name of Mordechai (in the Book of Esther) is believed to come from mor. As a medicinal compound, it has been used to kill pain, heal wounds, and neutralize bad breath. Today, myrrh can be found in health food stores as an ingredient in natural toothpaste and mouthwash, where it is used as an alternative to fluoride to fight dental decay. It is also available in capsule form, as a tea, and as an extract.

There is some documentation that some ancient civilizations may have even used the plant to combat cancer. If so, the current study represents the first scientific evidence of its effectiveness, the researchers say. Developing any anticancer drug from myrrh may take five to 10 years, says Rafi. Animal studies of the current compound are planned. The researchers are in the process of filing a patent on the anticancer compound.

Asked to comment, Prof. Raphael Mechoulam of the Hebrew University School of Pharmacy’s department of medical chemistry and natural products told The Jerusalem Post that the finding is very interesting. “Jerusalem balsam, which contains myrrh, has been used for thousands of years – even today in monasteries – in salve form to treat wounds and growths. We have been using myrrh in our lab on wounds, too. However, one must remember that numerous natural substances have been found in the lab to have an effect on cancer cells, and most do not work in humans. Nevertheless, this is an important, reputable journal, and the research should be pursued in further studies,” said Mechoulam, who is best known for his work on cannabis.

As part of a larger search for anticancer compounds from plants, the researchers obtained extracts from a particular species of myrrh plant (Commiphora myrrha) and tested it against a human breast tumor cell line (MCF-7) known to be resistant to anticancer drugs. Research data indicated that the extract killed all of the cancer cells in laboratory dishes.

Further investigations to isolate the active component of the extract found it to be a unique and previously unknown compound belonging to a class called sesquiterpenoids, which are typically found in natural products. Rafi indicated that an increasing number of compounds in this class have been identified as having cytotoxic properties against cancer cell lines, but none has reached the marketing stage.

The myrrh compound appears to kill cancer cells by inactivating a specific protein, called Bcl-2, which is overproduced by cancer cells, particularly in the breast and prostate, the researcher says. Overproduction of this protein is believed to promote the growth of cancer cells and make cells more resistant to chemotherapy. As cancer is influenced by many mechanisms, the investigators are now in the process of trying to determine whether the compound also has other mechanisms of inhibitory action against cancer cells.

On the basis of initial laboratory tests, the compound does not appear to be as strong as conventional chemotherapy drugs, such as paclitaxel (Taxol), vinbalstine and vincristine, which are known to be potent cancer killers. These drugs are highly toxic to healthy cells, however, says Rafi.

The researcher estimates that the compound tested is 100 times less potent than paclitaxel. The compound appears to fall within the moderate strength range of other recently discovered plant-based phytochemicals, including resveratrol (from grapes), genestein (from soy) lycopene (from tomatoes), and catechins (from tea).

All these compounds are derived from food and are thus unlikely to be toxic to healthy cells, which could mean fewer side effects as a chemotherapy agent, Rafi says.

Once the compound is better understood, it’s possible that its potency could eventually be increased, the researcher says, who envisions that it could be developed as an oral drug. Rafi predicts that there may be other compounds in myrrh that are more potent than the current anticancer candidate.